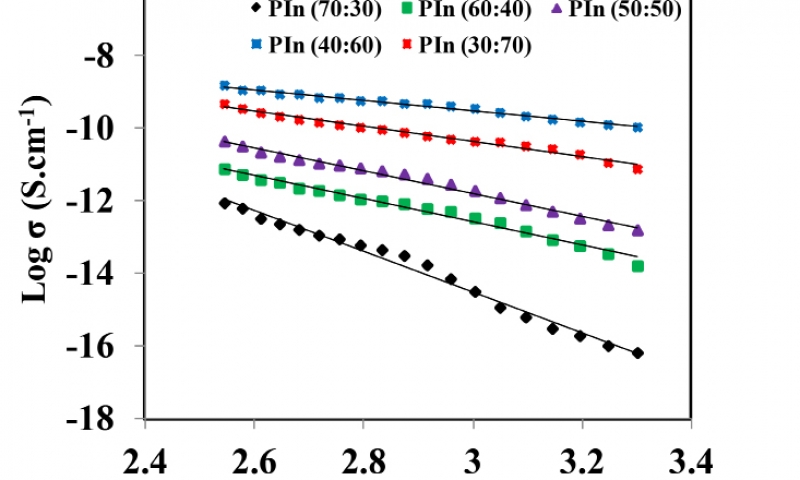 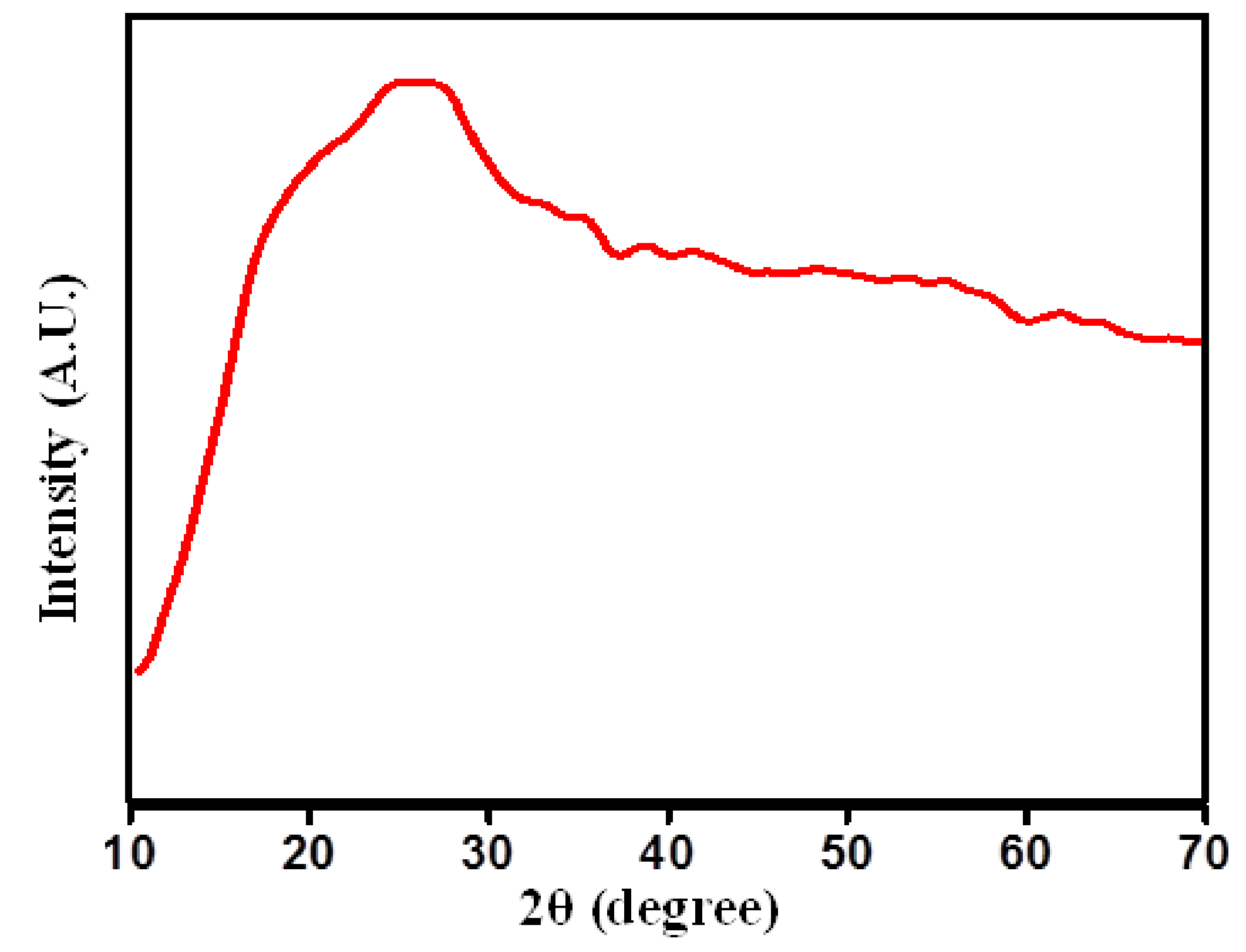 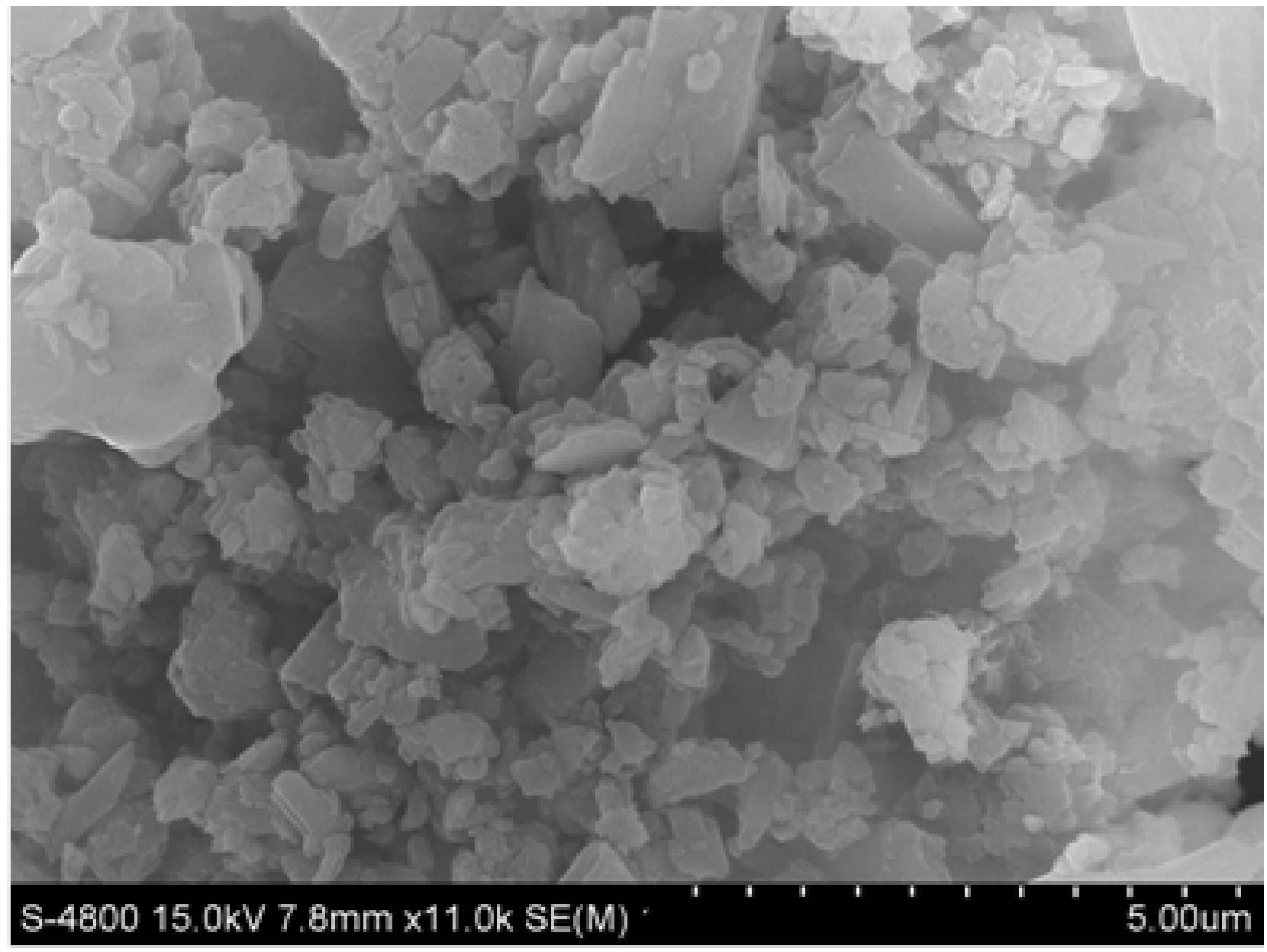 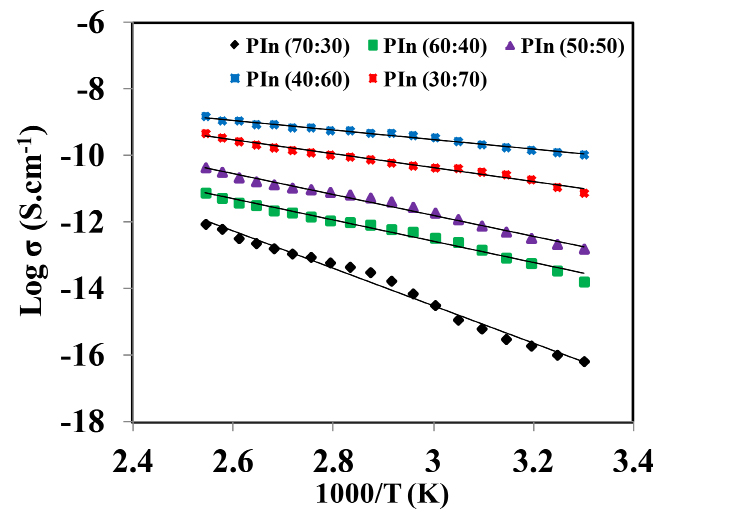 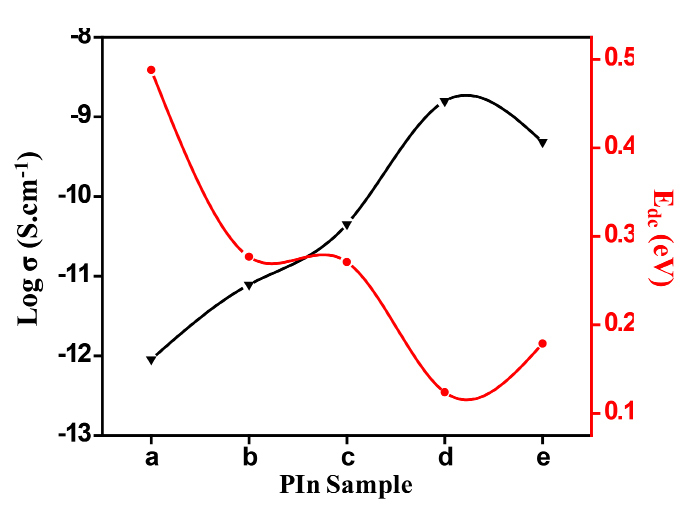 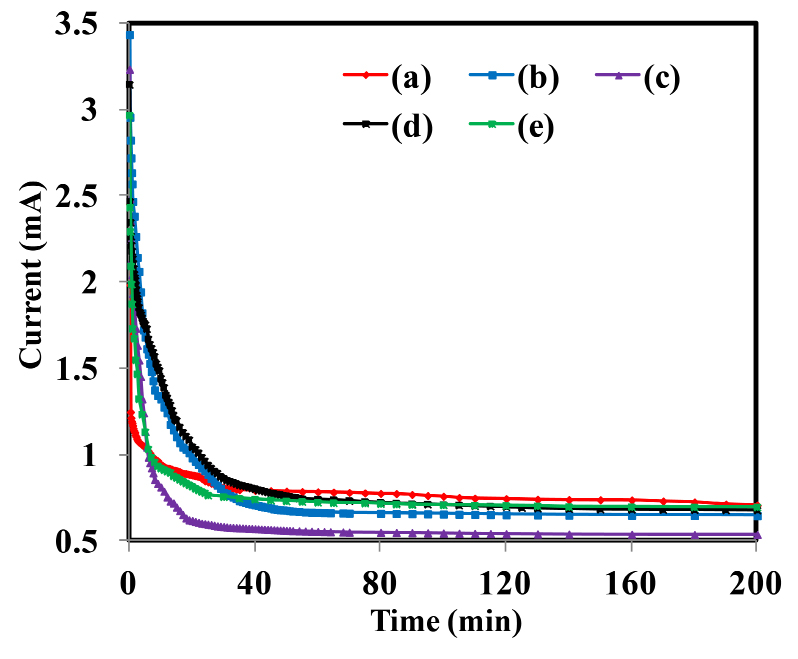 In this study, the different samples of conducting polyindole (PIn) were synthesized through an oxidative in situ polymerization of pre-adsorbed indole, employing anhydrous ferric chloride (FeCl3) as oxidant in aqueous solution. The optimized as-synthesized sample was characterized through X-ray diffraction (XRD) and field emission scanning electron microscopy (FE-SEM) techniques. The amorphous nature observed in XRD profile delicately supported by FE-SEM picture. The temperature dependent DC electrical conductivities of different as-synthesized samples were measured using two probe technique in the temperature range 303-393 K. The nature of plotted conductivities curves followed Arrhenius relation. The ionic conductivity was found to be dominant over the electronic conductivity and varies between 71% and 83%.

The existing literature reported the chemical oxidation of indole monomer using a strong oxidizing agent, chloroauric acid (HAuCl4), through one step in-situ route, for the formation of Au/PIn nanocomposite with a core-shell structure21. PIn nanoparticles are synthesized through chemical oxidative route in presence of a surfactant and also PIn-ZnO nano composites are prepared by in situ polymerization and incorporation technique22. The different samples of conducting PIn are synthesized by chemical oxidative polymerization of monomer indole by using anhydrous FeCl3 oxidant and studied the thermal, electrical and dielectric properties23. Gupta et al. have studied chemically synthesized PIn conducting polymers without using any surfactant. In this work, the synthesis method and solvent are playing crucial role on the morphologies and crystal structures of the polymers. Thermal analysis showed high thermal stability of the polymers24. Polyindole/poly(vinyl acetate) composite films synthesized by chemical oxidative polymerization technique, studied the DC electrical conductivity using two probe method25. The complex optical properties of chemically synthesized conducting PIn can be successfully studied and this polymeric material was found to have potential applications in optoelectronics devices26.

In the present work, an innovative approach has been made to report on novel one pot synthesis of PIn through chemical polymerization of monomer indole in aqueous solution. The samples of conducting PIn are derived with FeCl3 as an oxidant at room temperature. The characterization techniques, XRD and FE-SEM are employed to study the structural and morphological properties of PIn.

Indole powder (monomer), anhydrous iron (III) chloride (FeCl3), and hydrogen peroxide (H2O2) from SD Fine Chemicals (AR-grade) were employed in the current study. The indole monomer was used as received for synthesis of PIn without further purification. The samples were synthesized at room temperature (303 K) by mixing indole with FeCl3 in deionised water. H2O2 (0.3 ml) was used to enhance the rate of reaction and conjointly yield. The different samples of PIn were synthesized according to chemical oxidative polymerization method by varying the different stoichiometric ratios of indole to FeCl3 as (70:30), (60:40), (50:50), (40:60) and (30:70) Wt. %, herein after denoted by a, b, c, d, and e, respectively23. The Structural mechanism for one pot chemical polymerization of PIn is shown in Scheme 1.

Scheme 1. Structural mechanism for one pot chemical polymerization of PIn.

For DC electrical measurements, the samples were made in the form of pellets, polished and conducting silver paste was deposited on both sides. The area of the pellet was taken to be an area exposed to the electrode surface. The temperature dependent DC electrical conductivity of prepared samples were obtained over a temperature range from 303-393 K.

In order to estimate ionic transference number, both the sides of different samples of PIn were polished by graphite paste, so that the graphite electrodes (blocking electrodes) were obtained. The samples were held between the sample holders, which was provided with spring-mechanical pressure to have a good electrical contact. A constant (DC) voltage of 5V was applied to the samples. The measurement was performed at room temperature. The total ionic (tion) and electronic (tele) transference numbers were calculated from Eqs. (1) and (2)27,28:

where, Ii is the initial value of the current at the start; and If is the current on reaching saturation.

X-ray diffraction (XRD) is the most useful method for investigating the structural properties and crystallinity of the polymer. The X-ray diffraction was recorded with Cu-Kα radiation (λ=1.54 Å) in the Braggs angle range (2θ) from 10° to 70° with a scan rate of 2° per minute. The XRD patterns for the sample of PIn with stoichiometric ratio of indole and FeCl3 as (40:60) Wt. % is displayed in Figure 1. There are no characteristic peaks, which corresponds to any crystalline phase. The broad hump in XRD profile suggests an amorphous structure, which is the characteristic of PIn. Also, the amorphous nature of the as-synthesized sample has evident from the noisy peaks present in the XRD patterns. The amorphous hollow centered at 2θ positions of 26º. The polymer chain separation was estimated using the relation29:

Figure 1. X-ray diffraction profile of PIn sample with stoichiometric ratio of indole and FeCl3 as (40:60) Wt. %.

Surface morphology of PIn sample with stoichiometric ratio of indole and FeCl3 as (40:60) Wt. % was characterized using field emission scanning electron microscopy and displayed in Figure 2. The image shows the randomly distributed granular micro-porous morphology over the substrate. The micrograph depicts the presence of aggregation up to some extent as well as an agglomeration of particles. The amorphous nature observed in XRD analysis is delicately supported by the FE-SEM picture.

Using material dimensions, DC conductivity (σDC) for all the as-synthesized samples were estimated. The variation of temperature dependent conductivity in range 303-393 K for PIn samples with different stoichiometric ratios of indole and FeCl3 as (70:30-30:70) Wt. % is shown in Figure 3(a-e). With increase in temperature of the polymeric sample, the material become soft. Hence, main chain segment as well as the rotation of side groups becomes mobile in the matrix of the polymer. Thus, at higher temperature large number of dipoles are oriented. This results in the large equivalent surface charge density. The plot shows that the DC conductivity exhibits an Arrhenius-type temperature dependence given by the relation30:

where, EDC is activation energy which was calculated from the least square straight line fitting of plots and σ0 be the pre-exponential factor.

Figure 2. SEM micrograph of PIn sample with stoichiometric ratio of indole and FeCl3 as (40:60) Wt. %.

As the temperature increases, the DC conductivity of as-synthesized samples also increases, which ranging from 10-4 -10-6 S cm-1 within measured temperature range. The increased in the conductivity is due to an increase in charge-carrier concentration. From the plot, it is observed that there is no any abrupt jump in the conductivity values with temperature. This shows the complete amorphous structure of synthesized samples31. PIn sample with stoichiometric ratio of indole and FeCl3 as (40:60) Wt. % has the highest value of σDC, which is estimated to be 1.49×10-4 S cm-1 at 393 K. Also, the activation energy (EDC) required to overcome the potential barrier is found to be 0.12 eV which is the lowest value among all. The values of σDC and EDC for different samples of conducting PIn are as given in Table 1.

The variation of σDC and EDC as a function of PIn with different mol of FeCl3 is depicted in Figure 4. It reveals that the conductivity of as-synthesized samples shows the random nature. It is maximum for the sample with stoichiometric ratio of indole and FeCl3 as (40:60) Wt. % and then decreases continuosly from (30:70) Wt. %, while the sample with stoichiometric ratio of indole and FeCl3 as (70:30) Wt. % has minimum conductivity. The highest conductivity is found to be 1.49 ×10-4 S cm at 393 K. The value of activation energy ranges between 0.124-0.488 eV. There is a inverse relation between DC electrical conductivity and activation energy. In the system, even a small number of molecules or atoms will have sufficient energy to reach activation energy level at any temperature. With in increase in temperature, the energy of number of particles in the system becomes enough to overcome the potential barrier. This shows that, as temperature increases, the activation energy decreases. Hence, decrease in activation energy corresponds to delocalization of charge carriers due to increase in temperature and electric field. As the temperature increases, the ions diffuses in the space charge polarization . The orientation of polar molecules in the applied field have sufficient thermal energy to overcome the activation barrier30. This may be due to a maximum density of free electron and mobile ion concentration. Beyond a certain concentration of oxidant, σDC starts to decrease and EDC increase. It may be due to the hindrance in “mixed anion effect”32,33.

Figure 4. Variation of σDC and EDC for different PIn samples.

The plot between DC current and time for PIn samples with different stoichiometric ratios of indole and FeCl3 as (70:30-30:70) Wt. % is displayed in Figure 5(a-e). The transference number is the measure of ionic and electronic contributions to total conductivity. The DC polarization method was used to determine the total ionic transference number (tion) and electronic transference number (tele) by holding the pellet side to side between electrodes of graphite (blocking). The stable DC potential (5V) applied across the material to monitored the polarization current as a function of time. The total ionic and electronic transference numbers have been estimated from the plot using equations (1) and (2). The figure represents the plot of current versus time for all samples, which displays the typical behavior of the ionic charge transport. After a certain time, the total current becomes nearly stable at certain non-zero value. The residual current chiefly owes to electrons/holes. The values of transference numbers are found to be in the range of 0.71 to 0.83. This suggests that the charge transport in all the samples are mostly owing to ions. It shows that the conduction mechanism in as-synthesized material was dominated by ions.

The amorphous nature of as-synthesized optimized sample of conducting PIn confirmed through XRD which also reflects from FE-SEM analysis. The DC conductivity shows Arrhenius-type temperature dependence. The maximum value of DC conductivity was found to be 1.49×10-4 S cm-1 at 393 K for PIn with stoichiometric ratio of indole and FeCl3 as (40:60) Wt. %. The values of activation energy were found to be in the range of 0.124-0.488 eV. The ionic conductivity is found to be dominant over the electronic conductivity and varies between 71% and 83%.

This article is licensed under a Creative Commons Attribution 4.0 International License. (http://creativecommons.org/licenses/by/4.0/), which permits unrestricted use, distribution, and reproduction in any medium, provided you give appropriate credit to the original author(s) and the source, provide a link to the Creative Commons license, and indicate if changes were made.
© The Author(s) 2019

We use cookies to ensure that we give you the best experience on our website.
I accept